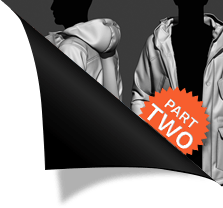 How to Create Great Looking
Clothing in Marvelous Designer

You need to subscribe ONLY ONCE, the
PROJECT FILES of PART 02 are included in the package!

Creating clothing for your 3D character is a difficult task and takes a lot of practice. Fortunately, there are some fantastic tools available to help you speed things up – one of which is Marvelous Designer. It offers a quick and effective way to create 3D garments by simulating the physical properties of two-dimensionally-drawn sewing patterns. 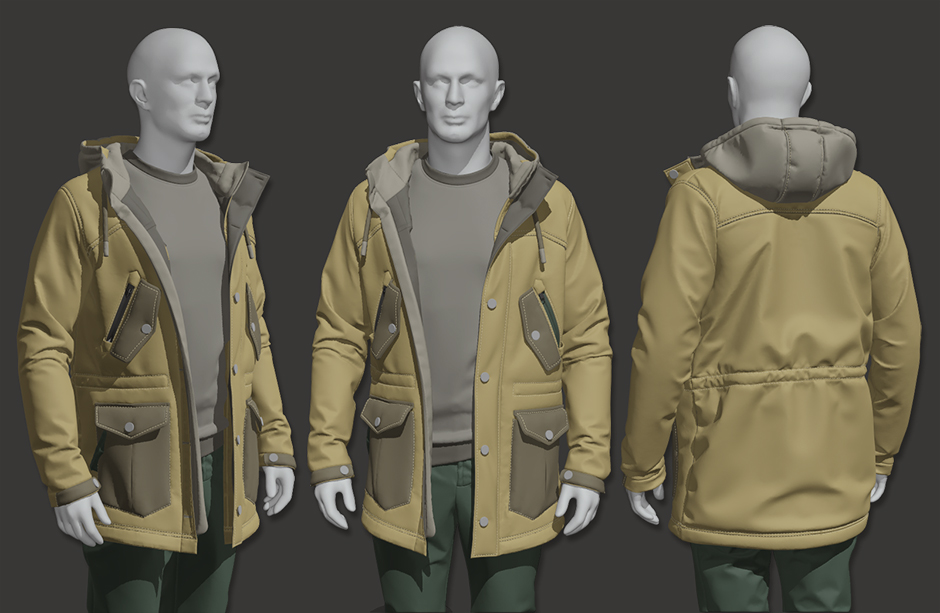 If you are totally new to Marvelous Designer (MD), let me give you a very brief overview of the process:

Regardless of the complexity of the garment, this process remains pretty much the same for all clothing created in MD.

What topics are covered in this tutorial?

In the following tutorial, I will show you my personal approach to creating clothing in MD by modeling a coat; from importing the avatar all the way to exporting the final garment. This tutorial is divided into 4 simple steps:

Who is this tutorial for?

Ideally, you will already have some basic knowledge of Marvelous Designer – but if not, don’t worry! With a small amount of additional research, you will be able to follow the steps with no previous experience. What’s more, you can use the comment section at the bottom of the page if you have any further questions.

Any version of Marvelous Designer is suitable for following all the steps outlined in this tutorial. To open the project files, MD version 7.5 is required. All files, including the avatar, are available FOR FREE!

Subscribe to the 3DGladiator Newsletter at the top of the page and you’ll receive an email with the download link. If you are already a subscriber to 3DGladiator, please check your inbox, as I’ll have sent you an email!

In this first step, we’ll take a look at what to consider while searching for reference images and how to prepare your own avatar.

As appropriate blueprints are often unavailable, sewing pattern images of similar clothing are adequate too.

Choose a design that allows folding. After all, that’s where Marvelous Designer’s strengths lie. When the fabric wraps around the avatar like a second skin, there is nothing to simulate and no drapery will be visible.

For simulation, fabric interacts with collision objects known as Avatars in MD. An avatar can be any mesh imported into MD. For this project, I chose a model from the 3DGladiator library. 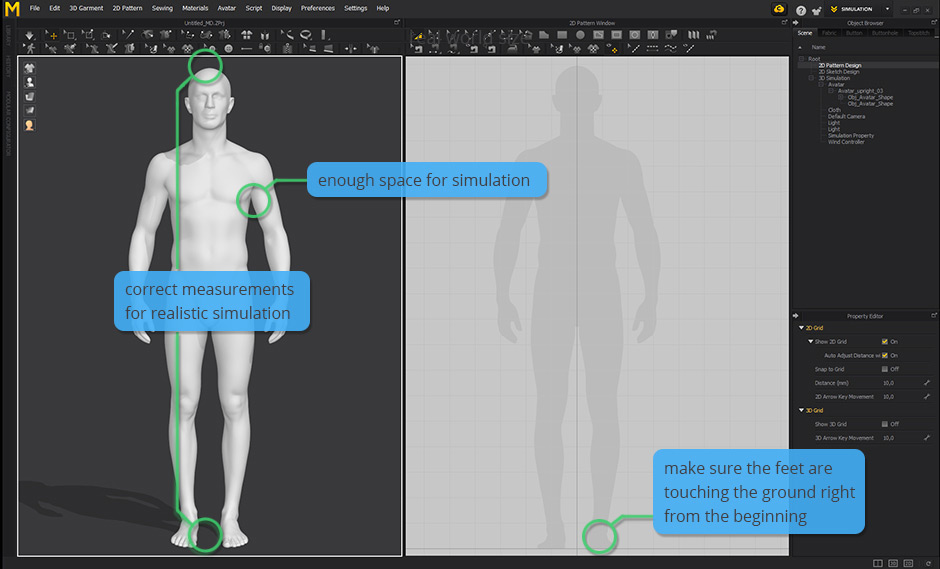 When you create your own avatar, avoid boring T-poses and add some posture. That results in more natural looking folds.

In this step, I’ll show you the fastest way to set up clothing in MD and how to avoid some common workflow pitfalls at the beginning of this process. 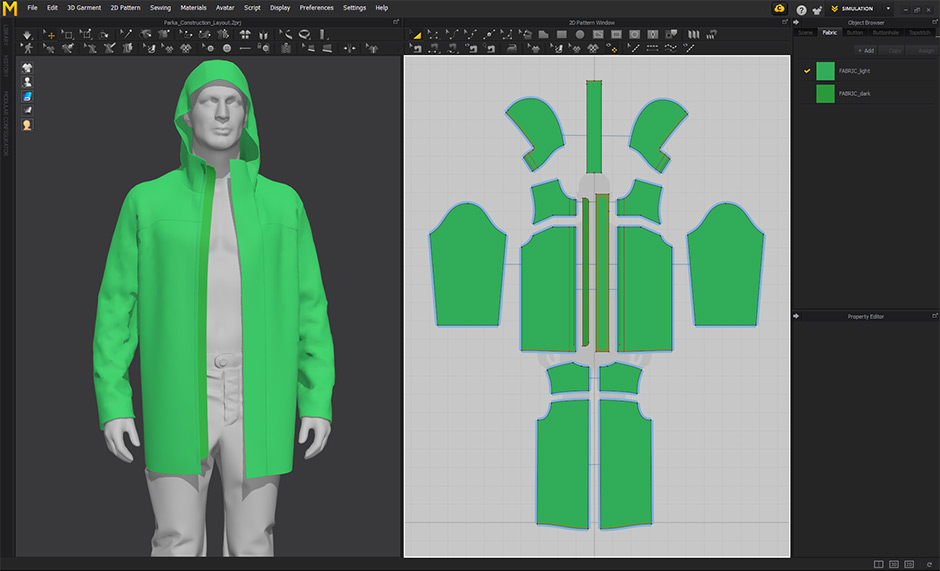 Our first goal is to create sewing patterns according to our reference image. So let’s focus only on the 2D window and forget about simulation or any other fancy MD feature for the moment.

Pattern Arrangement in the 3D Window:

When all patterns are drawn in the 2D window, it’s time to arrange them in the 3D window and align them with the avatar. 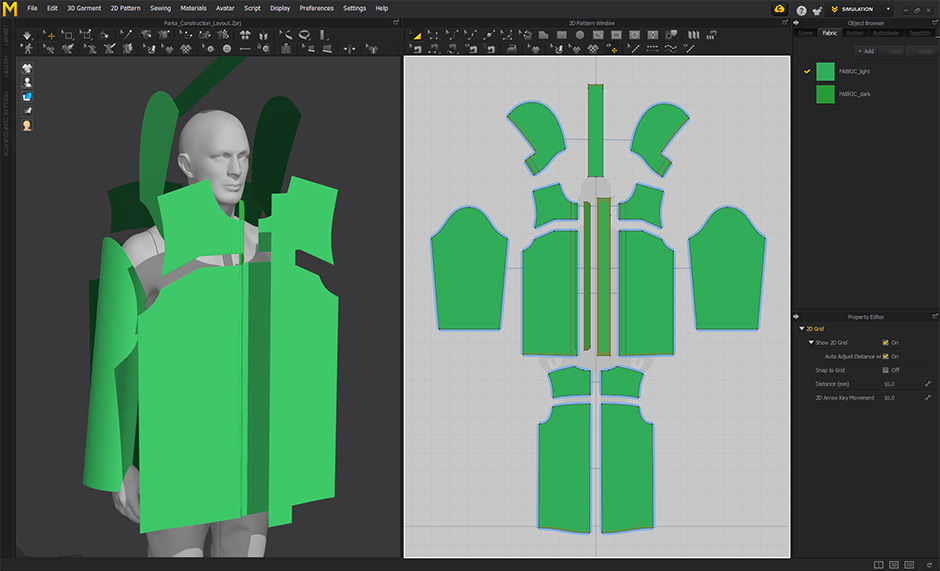 After the patterns are arranged in the 3D window, you can start the sewing and simulation process to stitch the pieces together. 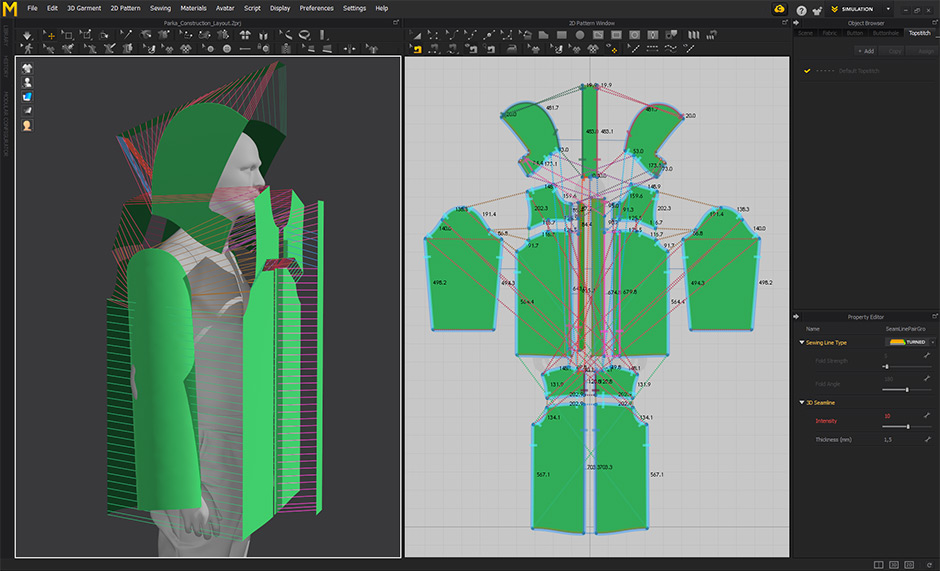 With the free sewing tool (M key), select the first part of a seam like you normally do. Before you start selecting the second part of the seam, press and hold the Shift key. When the sewing line turns green, you can start selecting multiple edges of the same or different patterns.

In this step, I will show you how to detail the coat and make it look like the reference images. The focus is still more on constructing the garment and less on simulating a certain look. I don’t care about styling until all secondary and tertiary elements are in place. 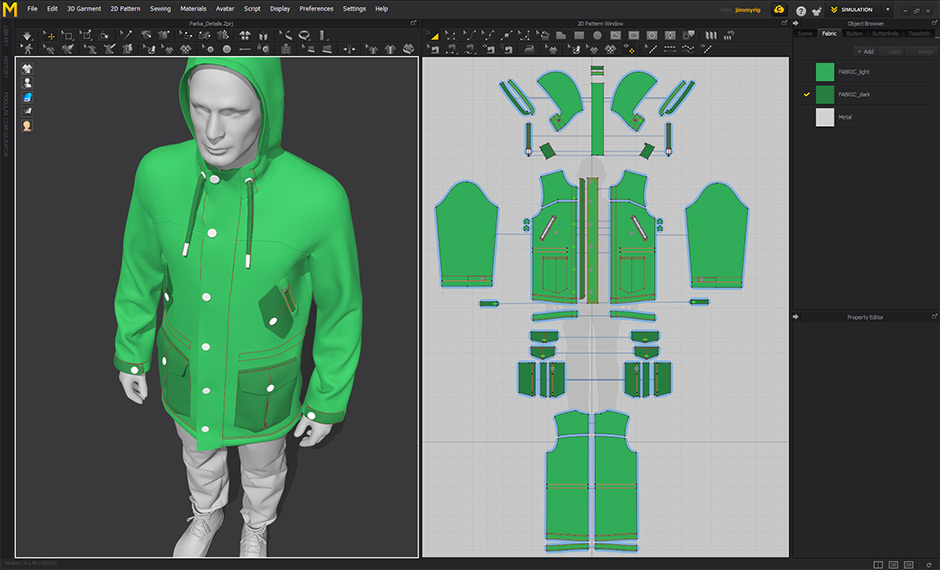 I prefer to add volume to certain edges by strengthening the hems with an extra piece of fabric that I sew on the inside. Watch the demo clip below first and then read the work steps to get a better understanding of the process.

I then repeated this process for the sleeves and the outline of the hood.

If the hem gets distorted during simulation, right click the stripe and select superimpose (under) to tell MD that this piece lies under another pattern.

Adding pockets to this model is simple and straightforward, as they are literally placed on top of the jacket. One of the garment’s more interesting details is the inverted, box-pleats pockets. Let me show you how I made them:

Basically, the procedure is similar to what I have already done to strengthen the hems. In this case though, I haven’t adjusted the fold settings manually like I did previously (folds strength and angle set to 10 and 100). Instead, I use the pleats folds tool, which does this automatically. Feel free to take a look at the demo file in the project folder (pockets_blueprint.Zprj)

If you are not sure how to approach a certain task, it’s best to start with an empty MD scene and experiment with a simple setup to gain a better understanding how things are build.

In Marvelous Designer, buttons and zippers are elements that help to style the garment; by holding patterns in place or adding functionality to the model. Unfortunately, however, they don’t export very well. When you plan to finalize the mesh in another 3D program, be prepared to replace these elements with solid geometry.

Buttons can be used in two ways: to stitch patterns together (that’s what they’re actually made for) and as design elements. When you take a close look at the coat, you will notice that I’ve applied them in a different way than intended.

The buttons sit on the big flap that covers the front zipper, whereas the button holes are attached where the buttons should be. Normally, it’s exactly the other way around. This allows me to disconnect the buttons from the button holes, but still keep the actual buttons attached to the flap when I open the jacket.

Zippers are nothing else than visual sewing lines and very easy to set up. All you need are two edges that you can connect with each other:

Use buttons and zippers sparingly. They can give you a headache during simulation sometimes.

Does it make sense to build tertiary design elements like strings or piping in Marvelous Designer? That’s a good question! Even though they look nice in MD, it’s not worth the effort most of the time. They not only slow down the simulation process, but you will also probably be much faster at creating these meshes in ZBrush or any other 3D application of your choice, and complementing the garment in a second step.

Anyway, let me show you how I add the hood strings. The process is simple and straightforward:

In this step, I’ll show you the tools I use to style the coat and how to adjust the MD properties to simulate complex models. 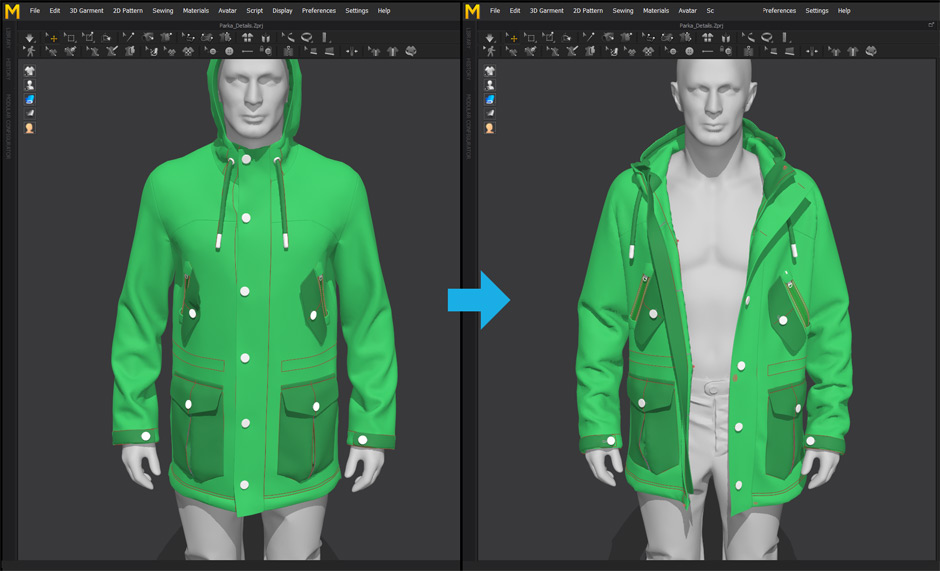 I usually don’t start posing the mesh until all elements are in place. Up to now, I have focused only on constructing the clothing and adding details, and not so much the actual look.

What you need know:

I haven’t touched any of the simulation or physical properties of the fabric yet. So far, the presets are more than sufficient. Let’s take a look at some important settings now:

What you need know: 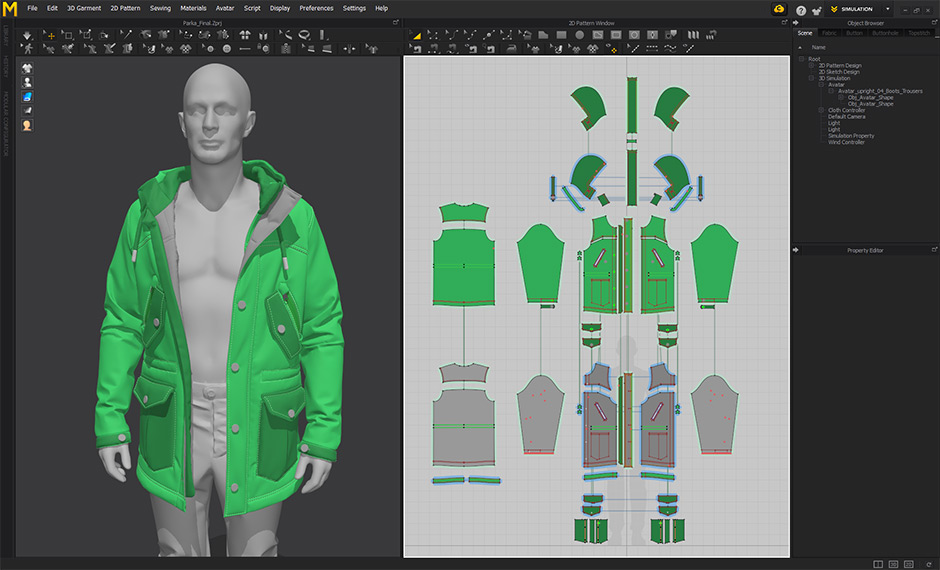 Even if Marvelous Designer’s simulation is built on physical properties of the real world, you can override these settings and insert your own values. For instance, go to the simulation settings and set gravity to zero or a positive value and simulate your garment under these conditions!

WARNING!
When you download the project files and open the final MD scene (MD_scenes/04_coat_final.Zprj) do not hit simulate unless your workstation has high processing power. I’ve decreased the particle distance to a value of 3 for certain parts. That makes simulation super slow and possibly freezes the application.

I hope this tutorial gave you some insights into my workflow and inspires you to create your own amazing clothing with Marvelous Designer.

Keep in mind that we’re only halfway through the entire process of finalizing the garment and making it ready for production. In the next part of this tutorial, I will show you how to export clothing from Marvelous Designer, quickly retopologize the mesh, and add details in ZBrush.

Go to the top of this page, and subscribe to download the project files and to be notified when new content is available. If you have any further questions, please feel free to leave a comment below. I will try to answer every query as quickly as possible!